Dear Friends
As Fr Alan reminded us last Sunday, Trinity Sunday, by coming to us as the Son, revealing to us the Father, and sending to us the Spirit, Jesus revealed the deepest mystery; that God is not distant and alone, but is three in one, a communion of love who comes to make His home with us. I would like to share with you this well-known icon, a representation of the Trinity, with which some of you might already be familiar. 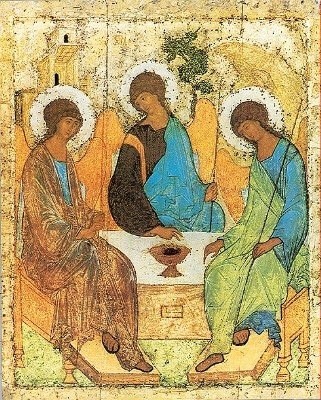 It was painted around 1410 by Andrei Rublev, one of the best known medieval Russian Orthodox icon painters. It depicts the three angels who visited Abraham at the Oak of Mamre (Genesis 18:1-15) but is often interpreted as an Old Testament icon of the Trinity. It’s an image is full of symbolism – designed to take the viewer into the Mystery of the Trinity I am happy to provide further explanation if you would like it – just ask me please!

Several people have told me they like the poems I share, so today I reproduce below a poem on the Trinity by Malcolm Guite, from his collection entitled ‘Sounding the Seasons’, published by Canterbury Press.

In the Beginning, not in time or space,
But in the quick before both space and time,
In Life, in Love, in co-inherent Grace,
In three in one and one in three, in rhyme,
In music, in the whole creation story,
In His own image, His imagination,
The Triune Poet makes us for His glory,
And makes us each the other’s inspiration.
He calls us out of darkness, chaos, chance,
To improvise a music of our own,
To sing the chord that calls us to the dance,
Three notes resounding from a single tone,
To sing the End in whom we all begin;
Our God beyond, beside us and within.