Life in the parish was relatively quiet last week. I hope that all families with children of school age were able to enjoy spending time together over the half-term break, despite the rather chilly weather.

Life in the Church of England nationally was more eventful, with General Synod meeting here in London. For those of you who missed the news, Synod voted not to take note of the House of Bishops’ report which advised that the Church should not change its opposition to same-sex marriage, but should adopt a ‘fresh tone and culture of welcome and support’ towards gay people. It claimed that there is little support for changing the Church’s teaching on marriage, namely that it is between one man and one woman.

The Archbishops subsequently wrote that ‘the way forward needs to be about love, joy and celebration of our common humanity; of our creation in the image of God, of our belonging to Christ – all of us, without exception, without exclusion’. Their proposals for moving on include establishing a group (chaired by a woman bishop!) to advise dioceses on the development of pastoral practices with regard to human sexuality. In the meantime clergy are able to bless cats, dogs, nuclear submarines and much more besides, but not same-sex marriages. 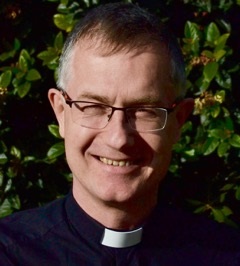 Maybe now that I have been officially licensed by the Bishop of Kensington as your curate, been around for a few weeks and even preached my first sermon at St Nicholas’, I ought to introduce myself.

I grew up in the countryside near Oxford, and have lived in West London for 20 years; first in Ravenscourt Park and for the last 10 years in what might politely be called “Chiswick fringes” between Askew Road and Uxbridge Road. After a couple of decades working in the City I changed careers to become a translator, specialising in financial and legal documents from German, Russian and French into English. Having been persuaded around the turn of the century by Eileen McGregor to act as PCC treasurer I subsequently became churchwarden at St Michael and All Angels, Bedford Park and started training for the priesthood on a part-time basis at St Mellitus College in Earl’s Court (with Andy Rooney) in 2012.

Since being made deacon in 2015 I have served at parishes in Ladbroke Grove and Docklands – both of which had a rather different social mix to W4. I am now looking forward to being made priest later this year and spending several years at St Nicholas. You are likely to see my wife Jane in church regularly and my two grown up daughters occasionally. I have retired from running because of bad knees, but still cook (and eat) as much as I can. As I am combining my curacy with a full-time job, I still do not know exactly what my pattern is going to be for involvement in parish life – so let’s see how things develop.